Why These Cold Emails Worked

Last week I asked some folks on LinkedIn to send me some cold emails that actually worked. I thought today we’d go through them, and deep dive into why they worked. So, here are some actual cold emails sent by real sales reps that actually turned into meetings.

The email below was sent by Gunjan Marwah, one of the Video Specialists at Vidyard. Vidyard is currently doing a cool campaign called Stories in Focus with the help of sales thought leader, Chris Ortolano.

Using the trigger of Steve Richard from ExecVision being featured, Marwah was smart enough to focus on Steve’s Call Camps he does, and also references the video he did for the campaign. It obviously worked. 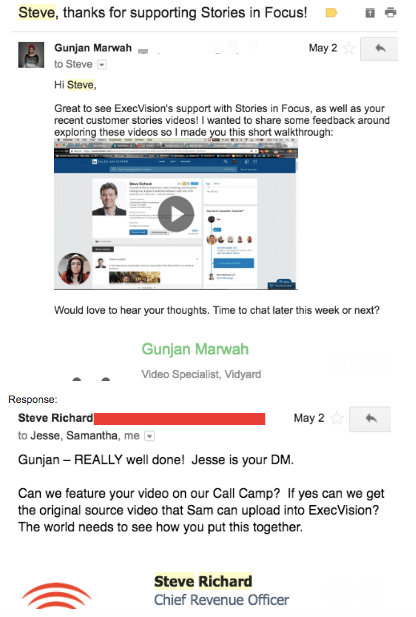 Marwah brilliantly used triggers and didn’t ignore the information she had in front of her. So many emails get sent, and if she had just sent Steve Richard a video pitching Vidyard, the whole thing would have fallen apart.

Instead, she focused on him, and even framed the value prop around ExecVision’s potential use case.

Remember, you aren’t always selling bells and whistles. Sometimes you are selling possibility.

Example #2: Give Before you Take

Here is an email from Taylor Pyle at G2 Crowd. 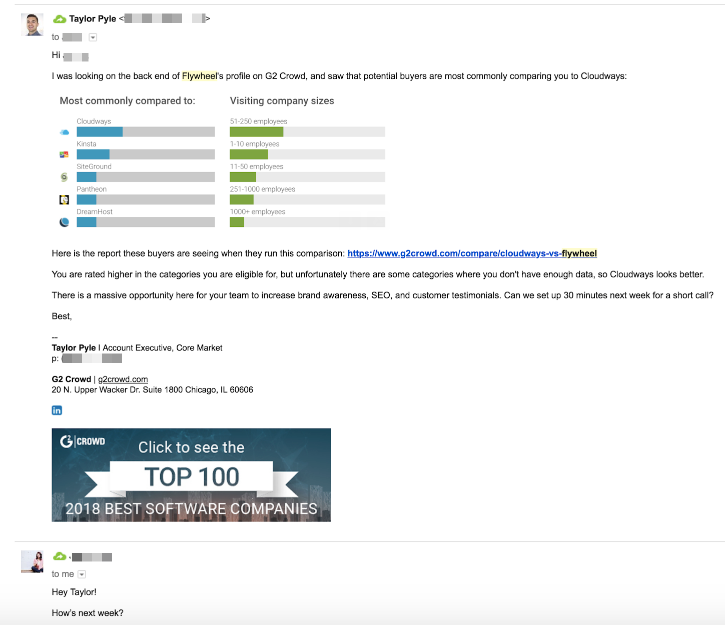 Pyle decided it’d be a good idea to dig into the data they had available at G2Crowd, and give it away to drive a conversation. Whenever you prospect, not only should you personalize, but you should always offer to be a resource by giving more than taking.

Give before you ask for a meeting. Maybe you can give some intel you have, or share a prospect’s job post.

I usually argue to only have one call to action (CTA) in a cold email, but the data is being given away to drive a conversation. Pyle didn’t pitch off about G2Crowd’s features. He didn’t ignore the intel he had, and as a result he got the meeting.

In this email from Kelly Hayes from Oracle, Hayes focused on her personal life to infuse her personality into the email. She tells the prospect that her fiancée wants her to buy something off this prospect’s site for Christmas. I used to do this all time with prospects. Find real life interactions with a target account, and lead my cold email with it.

If you do this, it’s important not to fake it and make things up. I know it’s tempting to just say whatever and pull it out of your ass, but when you end up getting a positive response and getting on the horn with your prospect, they can tell you are lying.

Be honest, and you’ll have more fun prospecting too. While this email may not be perfect mechanically, there is enough of a human story to it.

Example #4: Use your Prospects Interactions with you in a Conversation

Nate Smoyer from NateSmoyer.com saw that a prospect liked a post of his on LinkedIn. Smoyer was careful to not only acknowledge it and jump right into a pitch. He decided to do a deeper dive by jumping into the prospect’s media kit process as well.

To keep the conversation more friendly, he asked them if they had read a book he enjoys. It likely relates to the blog post. In fact, until the last sentence of the 2nd paragraph, you can barely tell this is a sales email. Always keep your intentions honest, but keep a conversation going. You don’t go up to a person you are interested in and ask them on a date right away do you? You converse, and create a dialogue.

Example #5: Use Prospect’s Personal Interests to make a Sincere Connection

Jacob Goodwin over at Refract noticed his prospect liked the Arsenal, so he wrote about Arsenal’s longtime football manager, Arsène Wenger. Rather than just pitching, he figured out a way to tie this prospect’s interest into his value proposition.

Subject: The Thierry Henry of GoCardless

Goodwin did jump into the pitch a little bit, but the creativity and personalization sparked a conversation about sports vs. the product, and got a response.

Jeremy Leveille was introduced to the correct contact to prospect. When he researched this new contact, he noticed the prospect went to college to become a Spanish teacher at one point of their life. Jeremy decided to use that to his advantage, and attempted to impress the prospect by writing his email in Spanish: 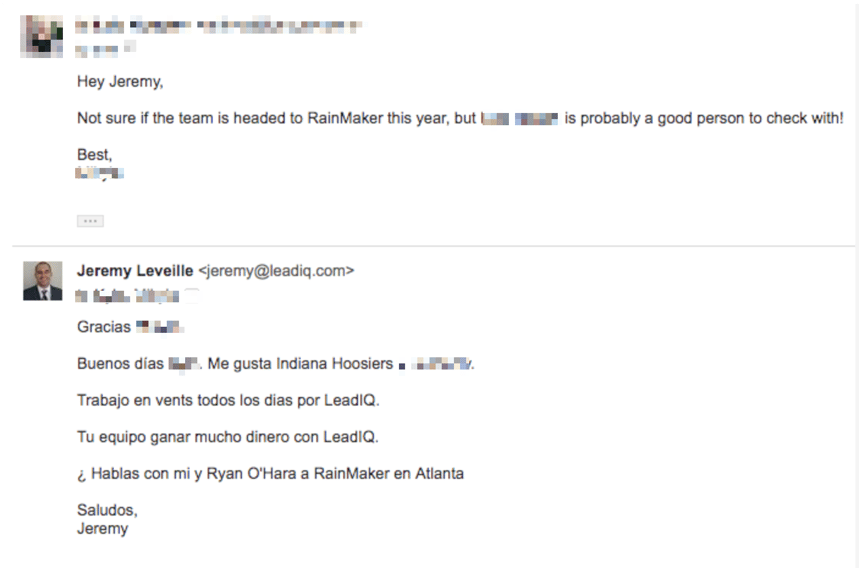 Personalization is so important. When creating cold emails, connect to the prospect on a personal level. Prospect the person, not the company. The reality is most sales professionals hate being prospected, be the sales rep that stands out amongst hundreds of others in the prospects inbox.

← How to set Gmail as Your Default Inbox

How to Keep a Prospect Warm (Without a Blanket) →