How to Identify your Teams Most Effective Prospectors

See all
See all
It was the first day of my first inside sales job and I was ecstatic to find out my sales territory was New York City—until I found out it was only about 3 square miles of it. My company had made a decision to go after Manhattan, divvy it up into three “micro-territories” and assign me as one of the lucky 3 to get one of these patches

The majority of my teammates had territories as large as the entire Southeast region, from Virginia through Georgia to Florida, or the Southwest region including California and Washington. My two Manhattan team members and I watched as our colleagues jumped on Free Trials and Webinar leads multiple times daily, hearing them complain about things like “too many inbound leads to manage.” I didn’t get free trials. I didn’t get webinar leads. My MQL’s were few and far between. I came to work earlier than everyone else, left later, and my numbers were still lower.

After a couple of weeks of whining about it to my manager (which got me nowhere), I made the decision to pull it together. I began to think,“I can’t change the amount of qualified leads in my territory, can’t do anything about the scarcity of my MQL’s, but what I can control is the quality of my messaging.” I had to make every touch count!

So, I started singing to my prospects. I sent them videos of me singing little diddies I wrote about our product and why we should connect. The response rate was amazing. Here’s an example of a video I did:

This potential prospect didn’t end up giving me a meeting because he was not the right person, but he did post this video on his Twitter and his LinkedIn, and as a result, many qualified prospects saw it, liked it, and started connecting with me.

Here’s one of the great responses:

Another one I had been chasing for awhile:

These messages didn’t always mean a meeting right away, but they were almost always a great nurture step. Here’s an example of a lead I converted to a contact with a song:

When one of my videos went viral on LinkedIn that was my big break. It got 250k+ views and was also reposted by the Chief Evangelist of AWS and played at an AWS cloud conference in Texas: 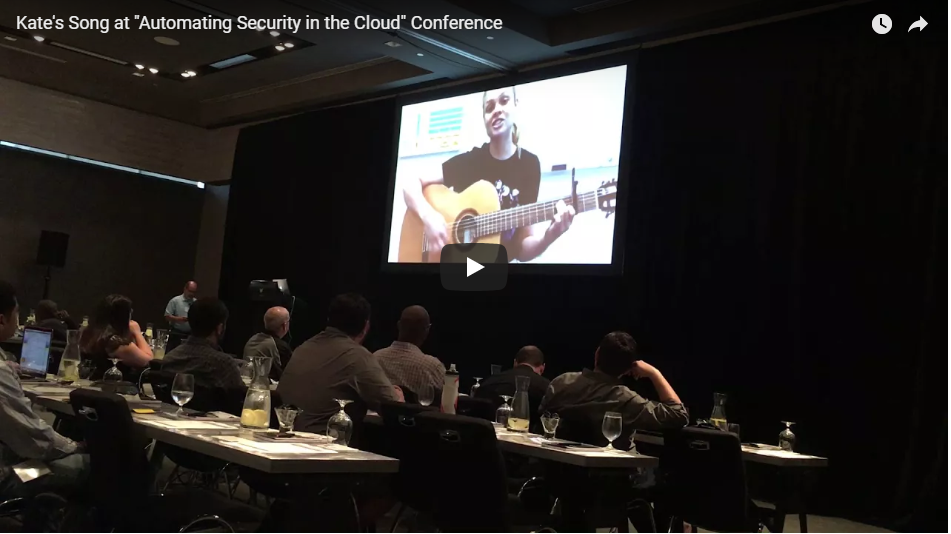 Suddenly, valuable prospects in my territory along with CISO’s, CTO’s and VP’s from all over the world wanted to connect with me. 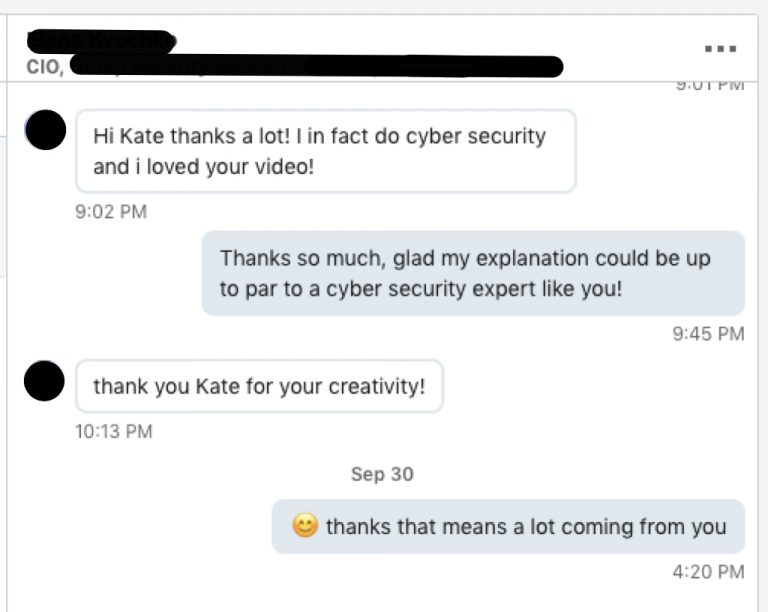 Kate’s network began to grow in the cloud security space thanks to creativity.

I had created my own sales funnel. I watched as my outbound leads converted themselves to inbound leads, which then converted into meetings.

I began to think about branding and changed my email signature to “The Cloud Security Singer.” From then on, every time I blasted my pipeline with emails about 50% of my prospects who opened the email began viewing my LinkedIn profile. From there, many went on to view my YouTube channel, which positioned me as someone interesting in their minds, and started to conjure curiosity about my company.

Now, when I call my leads, sometimes they already know who I am. I say things like, “Hi (Prospect), this is Kate the Cloud Security Singer from Evident.io, did I catch you at a bad time?” Sometimes they say things like, “Oh, Kate, hi! We love your songs here in our office.” If nothing else, it works as a great pattern interrupter.

The biggest wins happen when prospects connect with me after seeing my videos, and then months later reach out when they are ready and have a need for my product. 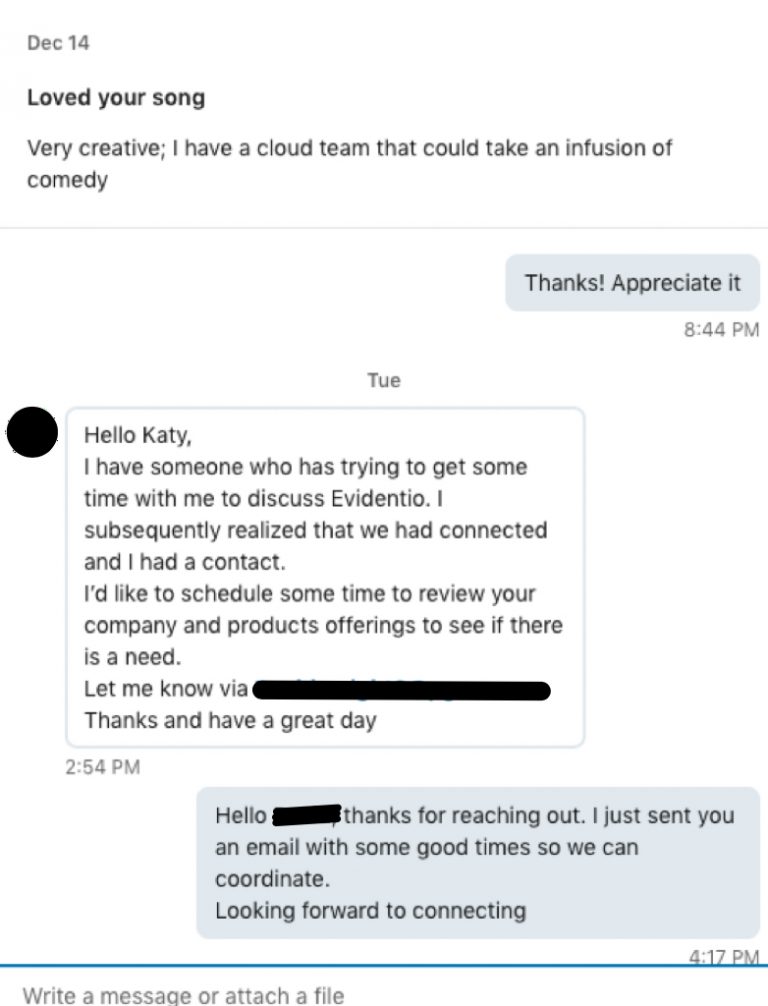 In the end I learned that what I thought was a horribly unfair situation actually turned out to be my greatest gift. Had my territory been “fair” I would not have been challenged to think outside of the box and I would not have written all those songs. As a result of being faced with this obstacle and overcoming it, I created a brand name for myself that has become one of my most valuable assets.

I’m happy to say that my company has since then redrawn the territories to be more “equal”. Now, with my normal sales outreach in conjunction with my personal sales funnel I have created, let’s just say I’m doing pretty well. 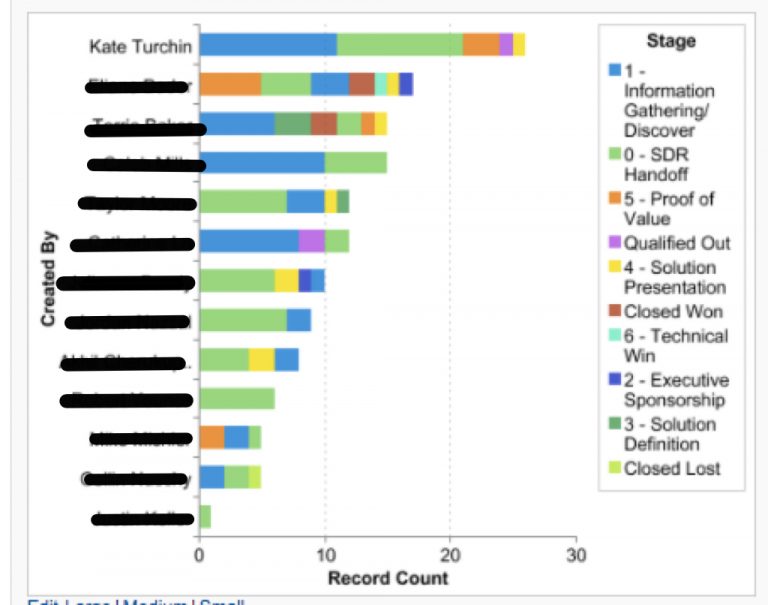 Being able to add value to the lives of other people is probably the most rewarding and fulfilling that I could ever ask to receive, even if it doesn’t affect my bottom line. The lesson here is that when you think outside the box and work to expand your horizon, you are rewarded in more ways than one. 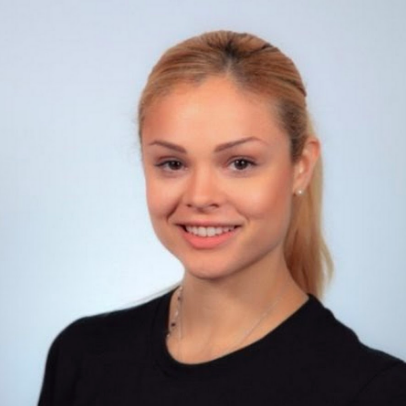 Kate Turchin is helping make cloud security a lot more fun for geeks and nerds everywhere. By day, she's a Cloud Security Advocate at Evident.Io. By night, she is the Cloud Security Singer

← Video How One Cold Email Mistake Cost This Rep a Reply