How To Build An Online Following On LinkedIn Starting From Zero

See all
See all
If you are into punching juke boxes, growing some sad excuse of a beard, or just starting out in sales, you likely are one of the many sales professionals out there trying to catch up on the social selling stuff. To be honest, up until last year, so was I. As a marketer who was getting back into prospecting, I had done a decent job softly pitching LeadIQ and developing relationships with people over social media to turn them into deals. However, I found myself having a big audiences of CTO, startup folks, and no real large sales audience except for my former colleagues at Dyn. If you are going after a new audience in sales compared to your old job, or just starting out, you likely building an audience starting from zero.

To build out LeadIQ, I was going to need to do something in the sales universe to get reps to know about us, who I am, and give them a reason to engage with me while cold prospecting them.

Today I’m going to tell you how to easily make content on social to help step up your social selling game. FYI, we’ll mainly be focusing on LinkedIn today, but most of these can translate to where ever you want to build an audience for selling. If you do these things, being recognized will likely help you get more replies and call backs when you cold prospect.

This was me trying to catch up on social selling a couple of years ago.

Main Tip #1: When posting content at first, don’t do it alone.

When you first starting on social, your audience is likely fairly tiny. This is almost what it’s like posting onto a newsfeed:

It becomes more of a grind to get people to consume and engage with your posts if you are producing content all alone. When you first start, if you write a social post, and you want to get others to see it, spam tagging a ton of influencers isn’t going to cut it either. I hate when people do that! 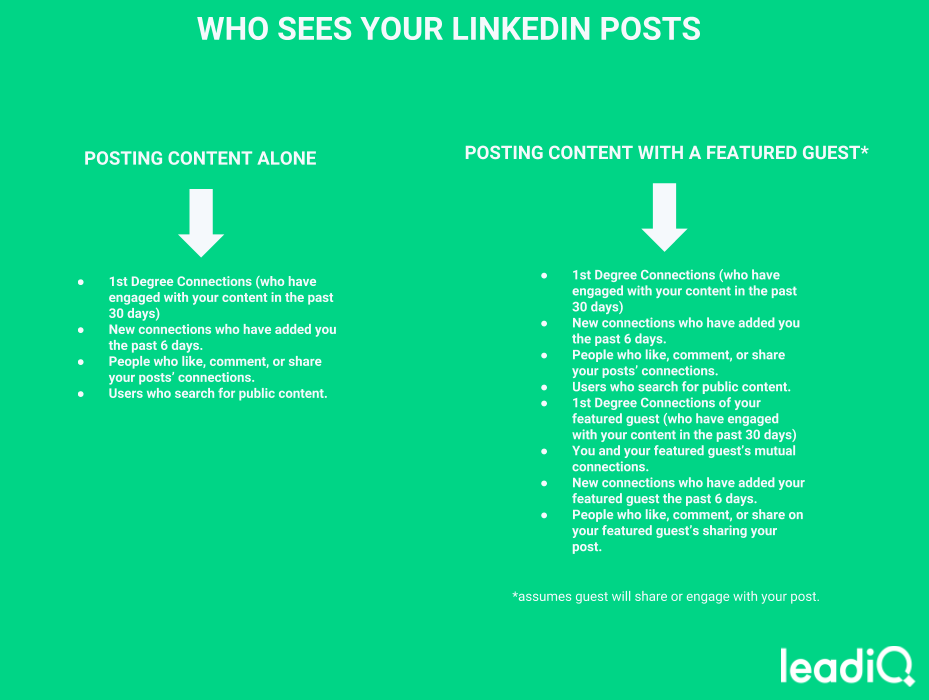 The right thing to do is produce some content with one other person who shares the same audience that you are trying to build. If you target VPs of Technology, do things with other VPs of Technology. Feature them, make most of the content about them and their story.

One good example of someone who does this really well is Lloyd Yip. Lloyd will often pick someone’s brain and ask them to talk about something that is relevant, then post a video with the person tagged. Here’s an example:

Why is it important to include someone else in your content?

Doing this makes it so not only is Lloyd’s audience seeing it, but so is Patrick Ward‘s connections. If Patrick validates the post with a share, comment, or like, all of Patrick’s connections who have interacted with one of his posts the past month will now see the content that Lloyd has produced.

Now you have Lloyd’s first degree connections seeing this who have interacted with a post in the past 30 days. You also have any new connections he has who have added him over the past week. Mutual connections of Patrick and his, and assuming Patrick shares, comments, or likes this, all of Patrick’s recent connections are now seeing it.

Increasing your reach increases the likelihood a potential buyer will see your content.

When I was first starting out at LeadIQ, I would try to shoot to do something with someone once a week while prospecting, so I found video interviews to be the easiest way to pump out content. If you work in sales there is a good chance you can talk to people. Audio/Video stuff is fairly simple to do because you can just be yourself.

It could be a quick rapid fire interview that’s under 2-3 minutes, a small piece of audio that you upload, or a blog post interviewing your guest. Another thing you can do is make a longer piece of content, then cut it down into mini pieces, and share it in little bits. This little clip from 30 Rock kind of reminds me of the format you can do just over Zoom:

If you need ideas on how to cut your videos together, this link will help you with that. Remember you don’t need to make your content perfect. It can just be really informal.

I like to record my interviews with Zoom, but you can use any webinar software. I know my good pal Will Barron records his podcasts using Skype, and he’s doing it full time! If you know how to use video conference, you can record with most platforms, and even for free if you keep your content short enough.

Here’s an example of a longer video I did with my Michael Pullman, who ironically now works at Zoom:

If you are going to do video content, at first it’s usually best to make content that’s shorter than this. Have 5 quick rapid fire questions for your guest, and try and make the interview less than 5 minutes.

Doing this will reduce editing to nothing (remember it doesn’t have to be perfect), and make it less of a time commitment from your normal prospecting.

It also will make it easier for you to post to LinkedIn natively since LinkedIn has a 10 minute limit on video length with your uploads.

Who should you ask to be in your content?

One of the things that turned into an AHA moment for me post my Dyn career is that you don’t need customers to be in your content. In fact, I actually think it’s better to do content with people you don’t know that well.

The reasoning for this is if someone writes back to you saying they aren’t interested, you can actually use an opportunity like this to build a relationship with them. I remember seeing a talk Gabe Larson over at Inside Sales did at the Sales Development Conference, where he talked about a playbook they ran asking people who responded “Not Interested” to be on their Inside Sales Podcast. It ended up building up over $300,000 in new pipeline at the time.

This is because you can use the content you are making to build a relationship with someone, and melt the ice from their cold exterior heart. Okay..maybe I’m being a little dramatic, but get what I mean.

Find prospects who change jobs frequently. Those are your red hot leads for this because they likely want to keep putting themselves out there to build their brand. If there are influencers in your industry, I’d recommend sort of building a little bit of a following first before asking them to do things with you.

Hold off on the bangers at first.

No I don’t mean sausages. I mean the heavy hitter influencers. It’s better to get conformable with your format of content before you go hit the big players in the space.

Here’s an example. I’m a big fan of Joe Caprio, John Barrows and Lori Richardson, but I didn’t jump the gun and ask them to make content with me right away. I waited until about year into my content producing here at LeadIQ to ask them to be on a panel for a RateMyPitch Event/Video I was shooting in Boston.

When I asked them to do content with me, I had decent enough following at that point for them to say yes. Maybe they would have yes anyways, but I increased my chances not jumping to the big bangers right away. I also put them in a more comfortable situation knowing exactly what the format of the content would be like.

When your content is ready, post it and tag the person you featured. Then send them an email/DM on LinkedIn telling them you are posting it. Make it as easy as possible for them to share the content.

Posting is a science in itself. Spacing, the content you bring up, and if you use video, seeming interesting without sound are important. When I do videos, I try to have an interesting backdrop so my prospects will click on the video for sound. Sometimes I wear crazy hats, or shot some silly text at the beginning.

Generally speaking, LinkedIn doesn’t like links in post, which is probably why you see people like me saying “link” in the comments. If someone shares your post, make sure your repost the link in the comments if you have a link taking them somewhere. Talking with a few friends there, I’ve been told they are really keen on keeping people on LinkedIn which means they are more likely to show posts that have conversations happening on them than links taking you off the site.

Here’s an example of a post I did recently that’s getting solid engagement. The reason it worked is because I didn’t just bring up what’s in the video. I shared my editorial thoughts on some business experiences I had gone through recently, and then tied it to the video. I also tried to make the post entertaining by telling a story I knew would drive a discussion.

Remember, when you are social selling, it’s not about getting millions of views on your post. It’s about getting the right views.

Once you build a big enough following, you can graduate into posting your own content by yourself.

You’ll want to post at least once a week. I like to post 3 times a week if I can. I highly recommend blocking off time in your calendar to produce something and post it to social.

As you post more content you’ll slowly gain a following. Don’t get discouraged. Remember you want your content to be relevant to your target prospect. If you work in sales and don’t target sales reps, don’t make content about sales. Make content your buyer care about.

Why You Should Care about Soft and Hard Bounces →