How Sales Automation Is Changing Sales

See all
See all
Sales Automation is all the rage nowadays. Over the past decade, we’ve seen a massive shift towards inside sales in the B2B world. Teams are leaning more and more on prospecting to build up their revenue.

As a result, an entire sales software space has opened up, with hundreds of tools that will help sales teams sell faster. Per Venture Beat as of 2017, there are now at least 5–6 different options in every part of a team’s sales stack.

Sales tools are making it easier for salespeople to send more emails, make more phone calls, and touch thousands of accounts per week. With the sales process optimized, there should be no issues for sales teams to hit their quotas, crush their goals, and help their company to achieve their revenue milestones.

Yet …60% of salespeople won’t hit their quota this month. It’s no secret. Most people don’t like being “touched” by a salesperson.

Sales has a bad name.

It’s hard to deny that salespeople conjure up a bad image in most people’s mind. There is a stereotype of salespeople being pushy, calling you, and sending never-ending emails about how their services would be tantamount to you or your organization’s success. All it took was a few bad sales people to make this happen (dishonest, lazy, inattentive, or selfish).

The reason sales reps don’t hit their quota is because they aren’t focusing on the basic foundation of a sale: the relationship.

Sales tools have made sales reps jobs easier and yet harder. Since they can touch many more people, now it’s harder to build that meaningful relationship.

When sales software first came out, its intent wasn’t to make reps prospect faster, and reach more accounts. Its purpose was to help sales reps manage their relationships better.

Today, many tools are being misused to help reps have as many relationships as possible. And yet, reps import hundreds of thousands of leads into their system, send mail merges, and think the same message will fit every prospect. As you know it’s hard to dance with two guys/two girls at the same time. Quantity and quality often does not go well together.

The most successful salespeople have a high EQ (Emotional Intelligence). They understand that sales is not about transactions, it’s about relationships. Buyers don’t make their buying decisions based on rational decisions. They decide to buy based on emotional instincts, relationships, and trusts. Sales isn’t just the art of presenting value. It’s also the art of building trust and relationships.

The best salespeople do their research to understand their prospective buyers.They consult, and qualify them focusing on a relationship first. They aren’t just trying to sell. They are finding angles to add value and establish relationships. 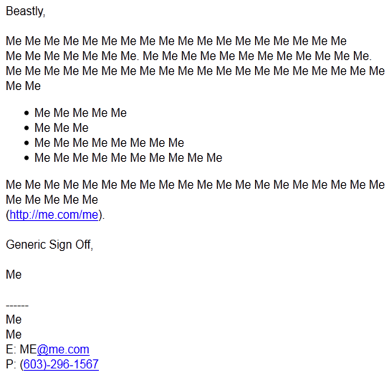 Being human is the future of sales. Freeing up time so we can stop sending emails that look like this.

The average response rate to cold emails in the industry is 3%. If you send 1000 emails, you will get 30 responses back. Our sales team test by writing highly personalized emails. The average response rate that they get was between 25%-35%. If they send 100 emails, they get 30 responses back. They are getting the same result. But there are 900 other future prospects that have not been touched, have not been annoyed by the “spam generic emails”, and can still be touched in the future!

Recently our VP of Marketing, Ryan O’Hara received a cold prospecting email from Matt Sharp, a SDR from Salesforce. Ryan posted a copy Matt’s email on social media saying that the email “buttered him up real good”. Ryan’s friends know that Ryan loves Tom Brady, and the email started with Tom Brady. Matt did his research and made Ryan feel good. 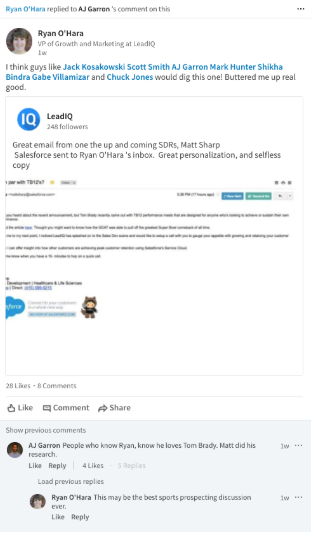 Imagine a world where each email that arrives in your inbox is a thoughtfully crafted email. An email that that is being written by someone who’s thoughtful and personal, who has clearly done their work and research. An email that makes you smile and makes your life brighter.

That’s the future of sales. 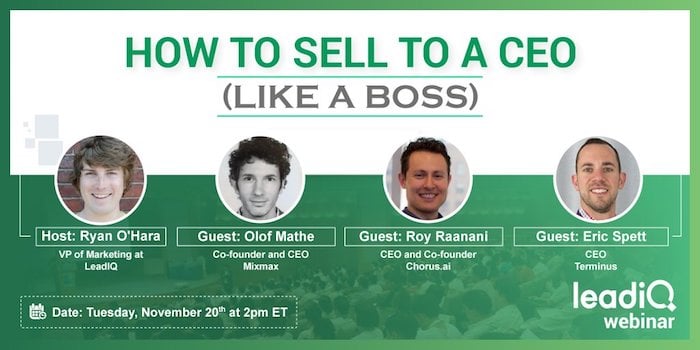 This post first appeared on the Fresco Capital blog. 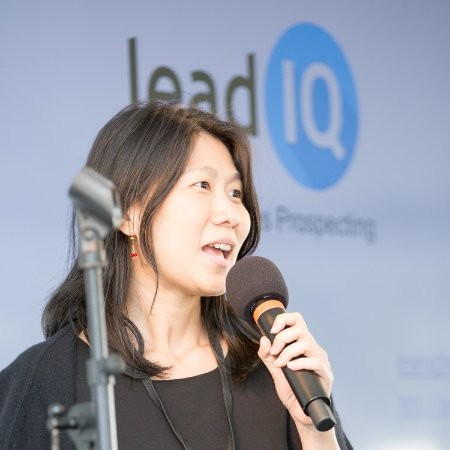 Mei Siauw is the CEO and co-founder of LeadIQ.

← Why Most Sales, Prospecting, and Marketing Suck

7 Tips for Prospecting During The Holidays →