7 Tips for Prospecting During The Holidays

Prospecting during the holidays is one of the hardest things for B2B sales representatives. We are about to enter the armpit of Christmas cheer, the out-of-office Kwanza bandanza, the 'I'm not interested' phenomenon or some call it, the holidays! Do you know what stinks, though? We still have sales quotas! We've put together some prospecting tips to help you reach your goals throughout one of the most challenging sales development times.

7 Tips to Prospect During the Holidays

If you are a sales manager planning out the month of December, most companies are about to do a big push to close out Q4 strongly. Your SDR team will set meetings, but most of them, if not all of them, are not going to close before the end of the year. It doesn't mean stop trying in December, it just means you have to be patient and not force urgency on your prospects or customers.

Remember, sometimes when an SDR is qualifying a lead/deal, it'll take more than one decision-maker to sign on to a qualified meeting. Locking DMs down at the end of the year when every department is juggling different days and times for PTO can be difficult when it's a brand new deal.

When I was running some of the conferences and events at Dyn, I remember getting pressure to take a meeting before Christmas with prospective clients. At the time, events were decided by our BDR team, our Director of Marketing, and our Director of Demand Generation. All three of us had very various times off during the month of December, and we were really focused on finishing up hiring for the following year. It gave me a negative outlook when the sales rep kept pushing me to meet before January. I ultimately didn't respond, and the meeting never happened.

As a sales leader, you can yell at your team about hustling and blabber about pipeline all you want, but your prospecting team is better off kicking January off well than it is to end the prospecting year strong. Obviously, it'd be nice to do both, but you have to be patient and put your prospects first. Prospecting during the holidays is not easy. Everyone knows that, but don't be pushy.

Oh man, this one drives me nuts! When I was a sales manager, I used to see reps on my team get the typical holiday objection we just talked about and be told to reach back out in the new year. You know what a ton of reps do? They thank them, create a task to reach back out, and move on to the next prospect.

If you wrote a good personalized email, or had a great call, get something on the books in January NOW. If the prospect is uncomfortable with booking that far ahead on their calendar, tell them the invite can also serve as a reminder for both of you to reschedule in the event it doesn’t work out.

Here’s a great example of a calendar invite to send: 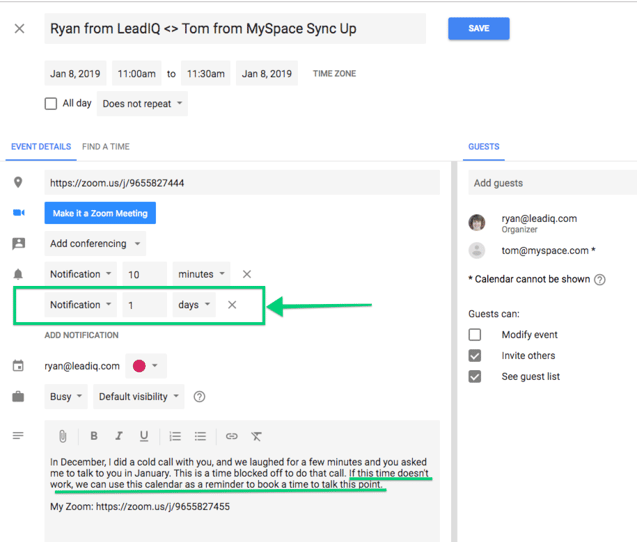 Remember to remind the prospect of what happened with your conversation in December. As a decision-maker, it often becomes difficult to remember conversations since so many other things are on my plate. Nothing is worse than the prospect not being prepared to discuss the topic of your first call in your sales process since you failed to remind them prior. If the prospect doesn’t accept the invite, don’t be afraid to shoot them a reminder via email.

Many sales professionals argue that the best way to remind a prospect about a sales meeting is through text messages.98% of all text messages are opened compared to 22% of emails, according to Mobile Marketing Watch.

Calling, from my experience, is too intrusive since they already agreed to a meeting. It also may seem kind of 'salesy' to redo a cold call. If your prospect is like me and has many unread emails in their inbox; seeing another meeting reminder will remind them just how busy they are.

Remember, you want to be friendly with your prospects. Put some personality into your text. If they have buying power, they are likely extraordinary people. They deserve extraordinary outreach.

Here’s an example of one I’d send if I joked with a prospect on a cold call about rat tails:

Build Reminders in your Sales Sequences/Cadences

If you are using a cadence or sequence software like Outreach or SalesLoft, I’d recommend building a series of reminders for all the prospects the second they say they are down to talk in the upcoming year.

You can boilerplate about 60% of your email and make the other 40% reference what you discussed with the prospect in December.

I’d do a 2 or 3 step sequence or cadence. The first step is a text, the next being an email, and finally a call if the prospect does not show the meeting. Do both steps 1 and 2 within 24 hours of each other to do what people call the Double Tap. The research indicated that the most successful sales interactions-ones that resulted in a close in a reasonable amount of time--started with a phone call and included an email that same day.

Use the 'Send Later' Function

If you are using a cadence or sequence software like Outreach or working the week between Christmas and New Years', use the 'send later' function with your personalized cold email. Having years as a prospector under my belt, I can count on one hand the number of deals I've brought in that closed in less than 30 days.

Think of the outcome of your prospect for a second. Even if you or your team members set up a great meeting in the second or third week of December, a lot of the deal momentum can die because of the holidays. It's important to try and close someone when their interest is highest. How much will their interest drop if they disappear from the office for a week?

If you have a short sales cycle, you can ignore this, but generally speaking, most companies we talk with have at least a two or three-month sales cycle on outbound deals. As a result, I recommend you spend the latter half of December writing personalized emails that will go out the first few weeks in January.

Tip: When you set the send later time, make sure it isn't a time that rounds to an exact hour or half-hour. It'll make your email look programmed.

I always tell reps that they have to be peacocks. They have to find a way to stand out when they prospect. Let me tell you what doesn't stand out. Using the subject 'Happy Holidays' any time after Thanksgiving to New Years.' I did a subject search from my inbox and found over 23 emails with that subject line. You need a subject line that will stand out. 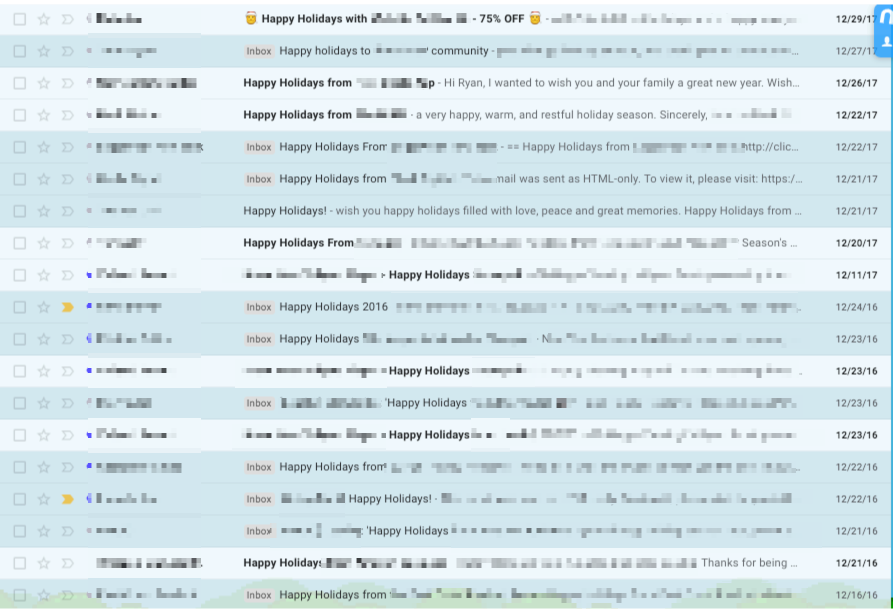 I’ve made this mistake myself two years back, and from my experience, you’ll get a better open rate using a different subject line with your emails.

A few years ago, when LeadIQ's office was really tiny, we tried to find a way to do something nice for our customers for the holidays. Our team was kicking around a couple of ideas. Our CTO, at the time, Angelo, bought a bunch of portable chargers with our old logo on it with the intent of using them as gifts. After some debate, we ended up mailing some of the chargers to a few prospects.

Logistically, I felt like while the gifts were useful, we wouldn't do something after the holidays with them. There was also a limit of how many we could afford, given the cost (roughly $20 per power brick). With so much of our prospecting going unanswered at this time of year, what if we did something with our time that made the outreach better once they come back to work?

Make a Prospecting Campaign. The plan was simple. We decided it'd be really cool to hire a String Quartet and asked them to learn a few classic rock songs. Based on our prospect's interest, we paired up songs with the musical taste of our prospects.

After recording a video to our prospects on a webcam, we gave an into to them to the backroom of our tiny office, turning on the lights, and revealing the quartet! The cool part is we were able to crank out about 30 of these over an 8-hour session with the quartet.

Why did we do this? Think of how unique the follow up can be for something like this.

"Hey Kelly, did you see that video we sent you with the song? What’d you think?” over a cold call certainly beats, “Hey Kelly..do you have a few minutes to talk? LeadIQ blah blah blah..."

If the prospect didn't respond, we followed up with a tweet of the video at the company tag, plus the prospect's tag if they had one. 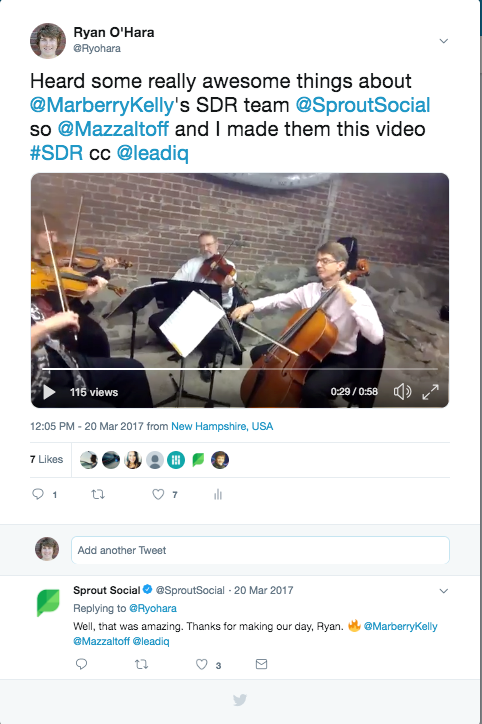 The campaign ended up yielding a 44% opportunity rate over the course of Q1 of the follow year. That means it generated 13 opportunities for one day of work. Total cost: $300

To Wrap it Up

Even though the holidays pose as one of the hardest times for B2B sales reps, this time doesn't need to be a death sentence. Don't give up on prospecting, it’s a good time to put your head down, and do some really cool experiments with prospecting. Just make sure you hit the go button in January, not before! Utilizing these 7 tips should help your time prospecting through the holidays go a little bit smoother.

← How Sales Automation Is Changing Sales

How to get More Personalized Prospecting Done →